Hey there, as you can see this is blog is all about gaming. And that's what I've been doing for pretty much all of my life. Currently I'm completely enveloped in Warhammer 40,000 and I'm breaking into the new Warhammer Fantasy system with the release of the new 8th edition.

Follow me as I build new armies, find newer and better ways to destroy my enemy, learn more about the rules, and just complain about the things that don't go my way :)

After taking yesterday off I was able to find some time tonight to finish up one of the Guardians.  Below are pictures of the completed model and paint scheme.  Let me know what you think.  I'm a little on the fence about it at the moment.  I just feel like something is off about it, and it's not quite popping the way I'd like it to.

After quite a few years of playing Eldar, I had set them aside when the new Grey Knight book came out to enjoy them.  The Grey Knights and their 3rd and 5th edition book had been a blast to play.  But recently I've had a hard time finding an enjoyable play style with them in the new edition.

Back towards the end of 5th I had developed an all deep strike Grey Knight army that I had a blast playing.  It was unusual, it was powerful, and it was unpredictable which made it a blast to play.  But the competitive GK builds have gone back to the static gun lines that I find boring.

With the new Eldar book I've found myself enjoying the game again, and in need of some hobby time.  So I decided to completely rebuild and repaint my entire Eldar army.  Call me crazy, I know I do, but I know that over the years my painting skills have developed dramatically and I can't wait to see how they turn out with adding an airbrush to my collection of tools.

Above is the picture of some guardians just from the 4 man box that I'm using to test out my paint scheme and the best way to paint them.  After watching plenty of videos and lots of tutorials I think I might have learned something ;)

To the left you can see two different methods I was testing for masking.  The guy on the left is using BluTack and the guy on the right is using Vallejo Liquid Mask (some of which has been peeled away.)

The Liquid Mask has quite a few problems I noticed, it tends to dry rather quickly, so if you're trying to apply it and it starts to dry, then it'll start to peel off during application.  Then it is also a pain to take back off, and if you're working quickly is less forgiving and will begin to pull paint off.  I think I'll be sticking with Blu Tack in the future for most of my masking needs.

Above are two variations I'm thinking about for the color scheme.  I'm really liking the Bleached bone and Dark Blue look.  And I'll be working the models further over the next day or two.  But right now I'm trying to decide Blue or White Backpacks, I'm leaning White, but what do you guys think? 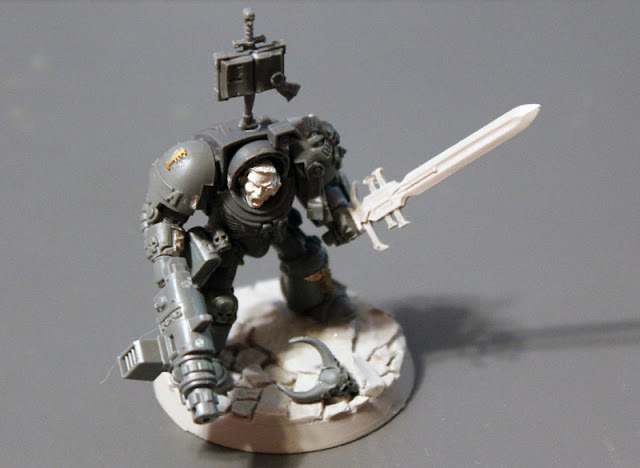 I just finished up the second Inquisitor leading my army here in a week and a half at the Alamo.  He was a lot of fun to put together and I had the chance to use some of the extra Hector Rex bits, as well as some from a couple other kits.  I've got to give a shout out to my Adeptus North Texas guys for helping out with some of those bits too! 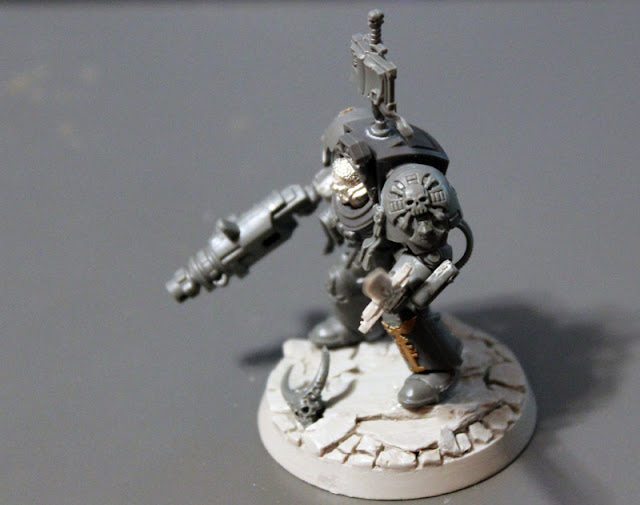 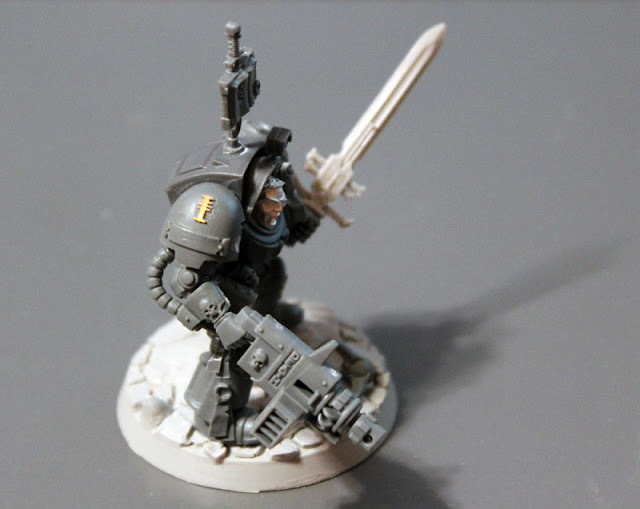 Posted by sandmanMike at 9:36 PM 2 comments: 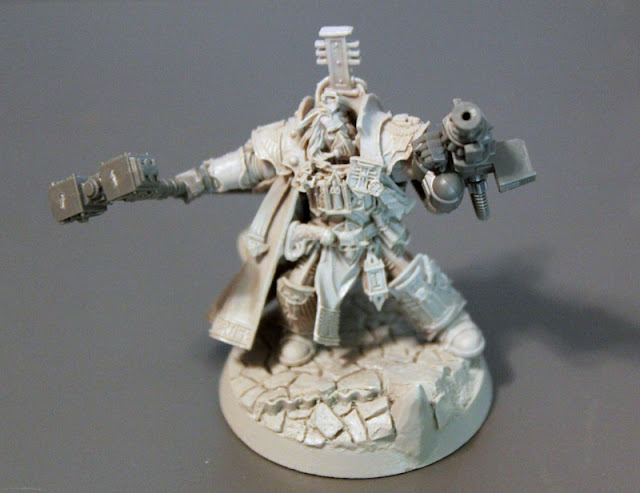 After getting a few friendly games in earlier this week I decided to move forward with the new list I'll be taking to the Alamo 40k GT.  It's very similar to the one I took to Astro but I've decided to change out the Inquisitor for a Terminator one to go along with the new terminators I'll be adding to the army to come in and deep strike along side they strike squad brothers.

Inquisitor Silth (not settled on a name yet) is armed with a Daemon Hammer and Psycannon and rains the Emperor's justice down on his enemies where ever the ground trembles beneath his feat.

I had had the Inquisitor Rex model sitting on my shelf for about two years now waiting to be put together and could never really find a reason to play with him and his rules, but I've always loved the model.  So after a little hacking here he is, minus the sword and shield, but who needs a shield when you've got psybolts exploding your enemies' head.

I hope you like the model, and I'll have it painted up here soon along with all of the other models I'm going to have to work on to get this army on board. 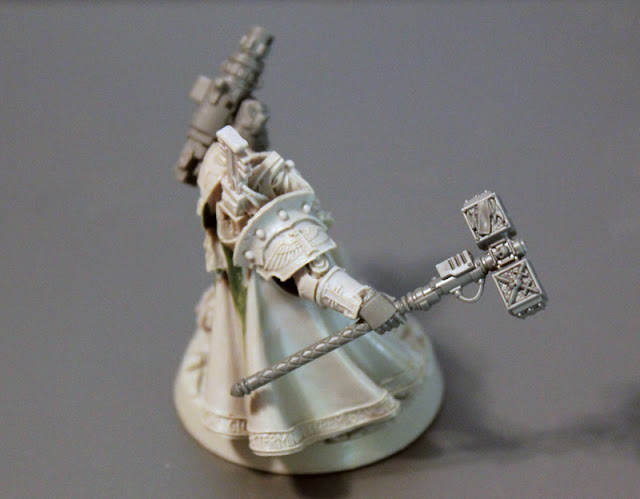 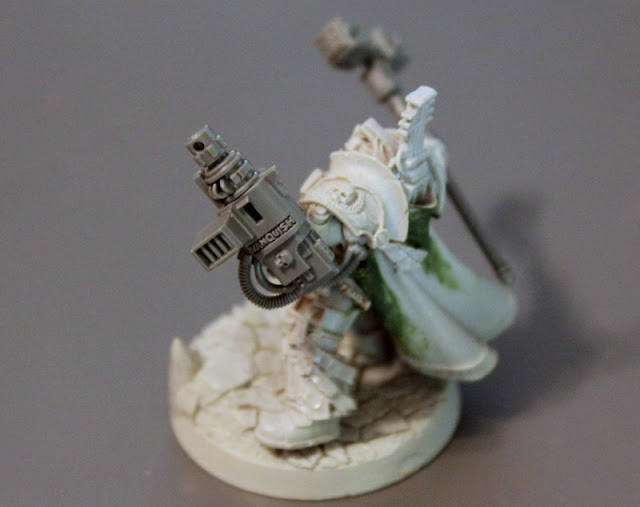 Posted by sandmanMike at 3:16 PM No comments: 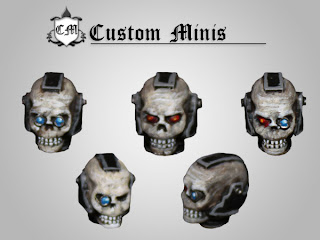 Custom Minis has started production of resin heads and bases.  Check them out here.
Posted by sandmanMike at 1:52 PM 21 comments:

Have a question, have something you'd like to read about, send me an email!